This double CD features 34 recordings from performers Restless Music (PENNY DAVIES & ROGER ILOTT's studio/label) has been fortunate to work with over 35 years in the folk music scene in NSW and in Queensland.
LINKS DISCOGRAPHY DETAILED TRACK INFO PERFORMER LIST 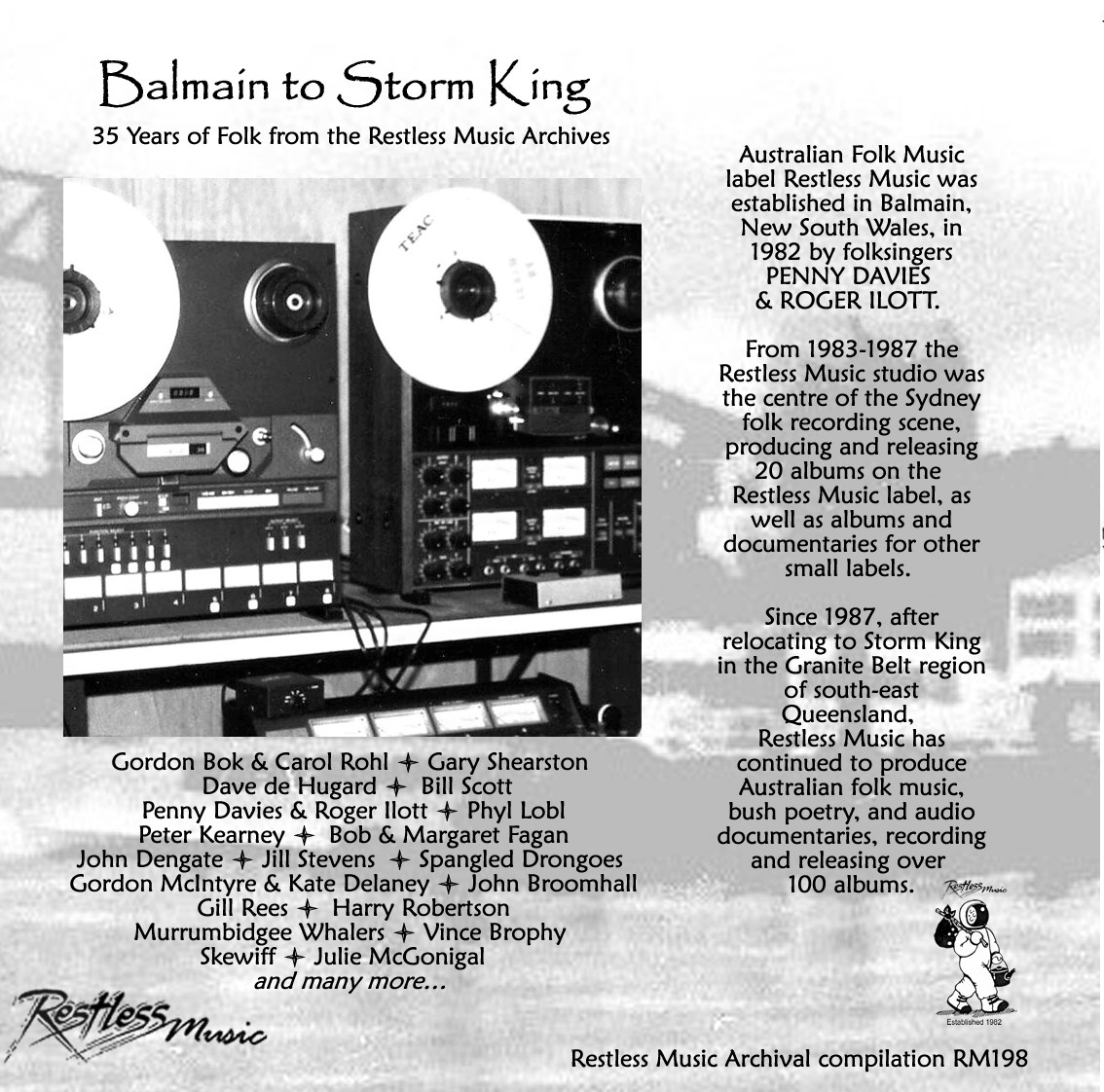 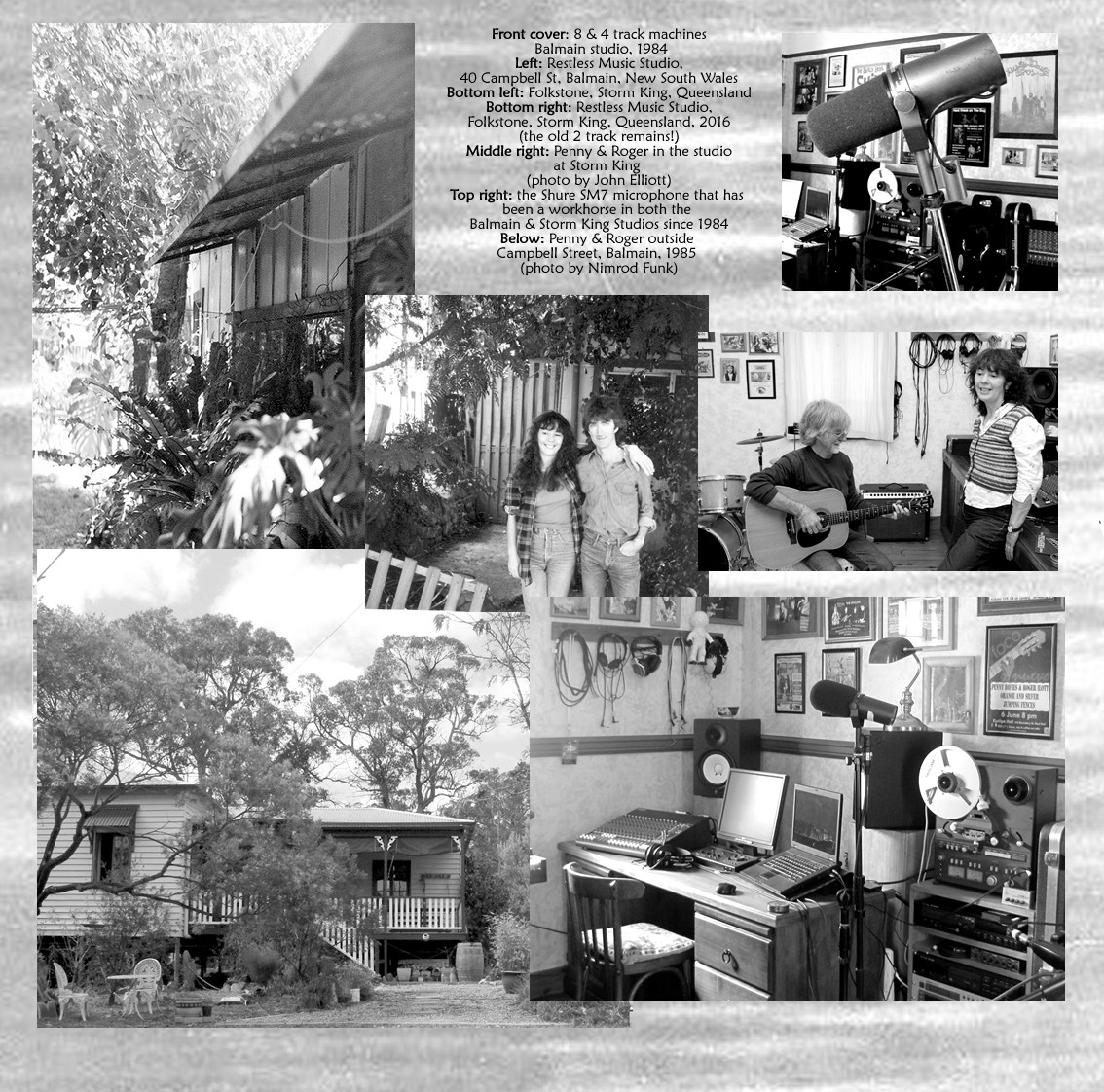 In July, 2000 we travelled to Byfield in central Queensland with a mobile recording setup to record songs and tunes by local musicians who participated in the workshops we ran that weekend. We recorded two tracks by Kerry Lee Olditch (1977-2001), a talented young violinist.

Recorded at Balmain, May, 1985 for Wilderness – Songs for Conservation & the Environment - Various Artists (RM005).

Inspired by American folk singer Pete Seeger's Brisbane, Queensland, concert in 1963, Dave de Hugard began performing songs and tunes, mainly on the concertina and accordion. This song was written to support the (successful) campaign to save Tasmania's Franklin River from being dammed by the H.E.C. (Hydro-Electric Commission). This campaign was the catalyst for the foundation of the Wilderness Society.

Amaranta specialised in South American music, performing around the Sydney folk scene in the mid 1980's. This is one of four songs recorded live in the Balmain studio. Concert harpist Caroline Sykes (M,F,A,) left Australia for the U.S.A. shortly after this recording, where she has studied, toured and performed with such artists as Judy Collins.

Peter Kearney recorded his albums Where is Your Song My Lord? (1985) and Signs of Hope in our Balmain studio for his Crossover Music label. Peter's songs have a strong focus on social justice. The lyrics, written by poet Maureen Watson, reflect pride in her own Murri (Aboriginal) people and culture.

On July 10, 1985, the Rainbow Warrior, flagship of the Greenpeace fleet, was sunk in the Port of Auckland, New Zealand, by the ‘action' branch of the French foreign intelligence service. Written and recorded by New Zealand folksinger Karen Ottley in the International Year of Peace.

Recorded at Balmain, 1987 for the album Drifting Down the Darling (SSM031). Previously unreleased original mix.

John Broomhall wrote this song about the impact on members of his family as a result of mining in his hometown, Broken Hill, New South Wales. We recorded two more albums, Free as the Breeze (1985) and In the Days When the Anzacs Were New (1987) for John on other independent labels. Balmain Recordings (RM098), a collection of unreleased songs by this prolific writer, was archived in 2009.

We recorded two other solo albums for English-born Gill Rees (1946-2012) – North Country Maid (RM008) in 1985, and The Kookaburra Laughed (RM015) in 1987, in addition to an album with her trio Phaedra (RM010) in 1986. A gifted music teacher and performer, multi-instrumentalist Gill's main instrument was the hammered dulcimer.

Skewiff were a dynamic bush music band, rising to prominence in the Sydney folk scene of the 1980's. The song concerns the 1808 rebellion – the only successful armed takeover of government in Australia's history.

This song concerns the Black Mesa Navajo people who were relocated away from their spirit lands in NE Arizona as a result of uranium mining. Though wheelchair-bound due to a climbing accident as a teenager, geologist Jill Stevens never saw her disability as an impediment to her involvement in music and environmental causes.

Bill Scott (1923-2005) was a prospector, cane-cutter, cane train fireman, folklorist, poet, novelist, songwriter - and teller of tall tales. We recorded Bill's first album, Hey Rain! Songs & Poems of Bill Scott (RM026) in 1990 and published Hey Rain! The Bill Scott Songbook in 2002. An American edition was published by Timberhead Music in 2003. Bill was awarded an O.A.M. (Order of Australia Medal) in 1992 for his services to Folklore and Australian Literature.

Traditional singer and concertina player, Alan Scott (1930-1995), joined the (original) Bushwhackers Band in 1955, and was a foundation member of the Sydney Bush Music Club. He published and later edited its journal Singabout (1956–67).

Scottish-born guitarist Gordon McIntyre (1940-1999) and singer Kate Delaney began singing together in Sydney in the 1970s. They were regulars at folk clubs and festivals all over Australia and released a number of albums. This anonymous ditty first appeared in the Kalgoorlie Sun newspaper in Western Australia.

Recorded at Balmain, 1985 for Under Southern Skies – Contemporary Folk from Bankstown & Beyond (RM004).

This bleak 1891 poem by the melancholic Barcroft Boake was set to music by former school teacher Margaret Bradford, a singer/songwriter and regular performer around the Sydney folk scene for over 30 years.

Recorded at Balmain, 1985 for Wilderness – Songs for Conservation & the Environment - Various Artists (RM005).

This song, contrasting the old timber-cutting methods with modern-day clear-felling, was recorded while Scottish-born Harry Robertson (1923-1995) was Artist-In-Residence at Chullora Railway workshops in Sydney between 1985 and 1986.

Dublin-born Vince Brophy worked in the maritime industry for many years. His songs draw on his experiences in the Wollongong, N.S.W. area, and the history of the south-eastern seaboard and inland waterways.

The Spangled Drongoes - immigrants from Britain, New Zealand and Malaya - were a hard-hitting politically-oriented folk band in the 1980's Sydney folk scene. The song reflects the prevailing cold-war atmosphere of the time.

Maine (U.S.A.) folksinger Gordon Bok recorded his first album (produced by Noel Paul Stookey) in 1965. As a soloist, or with friends, this influential American folksinger has released 37 albums. He has toured extensively, including a short concert tour of New Zealand and Australia in 2003 with his wife, harpist Carol Rohl. We recorded four songs with Gordon & Carol during their 2003 visit. The song was adapted from a Navajo Prayer by Josh Bogin.

Hey Rain! was the first of many songs we recorded by, or in collaboration with the eminent folklorist and poet Bill Scott. Since that time, it has travelled around the world and been included in many repertoires. Bill wrote this song with his daughter Elizabeth on a long rainy drive in North Queensland in the early 1960's.

Recorded at Balmain, 1985 for Wilderness – Songs for Conservation & the Environment - Various Artists (RM005).

John Dengate (1938-2013) was best known for his satirical songs, often castigating politicians for their failings. He was a teacher for many years, but gave it up to busk, with his songs and tin whistle, outside St James Railway Station in Sydney. The song dryly laments the destruction of Australia's native forests for pulp.

After Carol Rohl suffered a severe stroke shortly after returning from the 2003 tour of Australia/New Zealand with husband Gordon Bok, Peggy Seeger sent her this song. We performed it in concert with Gordon & Carol in Rockport, Maine in 2015, and recorded it a few days later. The song reminds us all that friends are there when you need them.

Gary Shearston (1939-2013) released his first Australian folk album in 1964. For many years he lived and performed in the U.S.A. and the U.K. His song Sometime Lovin' was recorded by Peter, Paul & Mary, and his version of Cole Porter's I Get a Kick Out of You was a worldwide hit in 1974. We began working with Gary in 2005 and recorded the last six albums for this prominent Australian folksinger. This song imagines a young hopeful peering into a world of American blues music in the 1930's.

Sharon Doro (1950-2015) played as a soloist and with other traditional musicians such as Jacko Kevans and Lionel O'Keefe. In 2014 we archived a collection of her accordion tunes recorded between 1997-2003 - Farabella (RM063). She wrote D'Oro Waltz for her parents who ran the Post Office in the village of Dalveen, Queensland, for many years.

Londoner Lee Williams arrived in Australia in 1972, and performed in the Sydney folk scene. For some time, he was known as ‘the Cockney Cowboy'. A live album recorded at Sydney's Kirk Gallery in 1976 was never released. We recorded tracks for his only album over a number of years, and released it in 1990 following his return from eight years living and working in Los Angeles, U.S.A.

Murrumbidgee Whalers were a dynamic three-piece folk band, with members from Australia, Britain and Ireland. They were regular performers in the Sydney Folk Scene in the mid 1980's. Irish-born songwriter Jim Lindsay documents the plight of young female Irish immigrants to America in the early 20th century.

Recorded at Balmain, 1986 for Singing the Weaving – Songs of the Spinning & Weaving Industries (RM011).

We first recorded Margaret & Bob Fagan in 1984 for the compilation album Workers in the Field - Volume 1 (RM003). They have performed around the Australian folk scene for more than 30 years singing a broad mix of British, American and Australian songs (with special focus on the Realist Writers), both as a duo and with their daughter Kate, son James and daughter-in-law Nancy Kerr.

A classically trained violinist, New Guinea-born Julie McGonigal played traditional fiddle with Bale-Em-Up Bush Band and Bunyips Bush Band in the Brisbane folk scene through the 1970'-1980's. We recorded her first album, Mists of Guyra (RM039) in 1993. Following the onset of the debilitating Charcot-Marie-Tooth syndrome she had to put aside the fiddle, but subsequently took up the hammered dulcimer.

Jim Gregory (1963-2001) arrived in Sydney in the 1980's from Glasgow. Playing around the folk clubs, he went on to perform with Alistair Hulett and traditional musicians including Eilish O'Connor, Peter Woodley, and Lindsay Martin. The song is about the transition of a reckless young male into maturity.

Phyl Lobl has been involved as a writer, performer and recording artist in Australian folk music since just prior to the inaugural National Folk Festival of 1967. She fought for recognition of Australian Folk music on the Music Board of the Australia Council, and was awarded the Graham Squance Award for services to folk music in 1986. The song outlines the hardships pioneer women faced on the land.

Craig Edmondson writes about Australian history and culture. His album was the final Balmain recording before we moved the studio to Storm King, Queensland. The song looks at the cultural insensitivity of many white Australians to the indigenous inhabitants at the time of the Bicentenary of European settlement in 1988.

Recorded at Storm King, 1997 for Stories from Quart Pot Creek – A Memory Quilt of Stanthorpe 1872-1997 (RM050). Traditional musician Dick Halligan has been active in the Queensland folk scene since the days of the Folk Centre in Brisbane in the 1960's. He was a session player on several Restless Music albums in the 1990's.

Mark Davidson is a Brisbane singer-songwriter who has played solo and with various groups around the Queensland folk scene for many years. The song contrasts fair weather friends with those who stay and weather the storms.

Following her stroke, harpist Carol Rohl described her daily ration of energy in terms of ‘saving my quarters today for going out tomorrow'. Touched by this description, I wrote the words, describing Carol's courage in the face of her difficulties, and sent them to Gordon Bok (Carol's husband) who wrote the tune. During our 2015 stay in Maine we recorded the song as a surprise for Carol. (P.D.)

Paul Best (1951-2016) and I were friends from Kindergarten days in 1956 in Sydney. We went through most of our schooldays together, played our first folk gig together in 1969 (and Paul's last gig in 2015), and remained friends and musical collaborators for 60 years. Paul wrote this song for a friend who was suffering the loss of a loved one. (R.I.)

Recorded at Balmain, 1985 for Wilderness – Songs for Conservation & the Environment (RM005).

During their childhood in north-western Sydney, sisters Amanda & Maria Lopes and their neighbours James & Kate Fagan wrote and arranged many songs together. This one was their loving tribute to the bush.

RESTLESS DISCOGRAPHY - Selected albums with reference to this compilation

More information on the sinking of the Rainbow Warrior: https://en.wikipedia.org/wiki/Sinking_of_the_Rainbow_Warrior